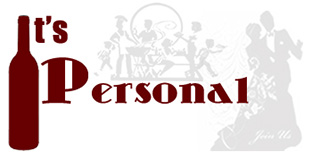 For the past few months I have been passing by this store at 414 Main Street in Placerville, across from the Bell Tower.

The sign says It’s Personal -Unique Gifts and Custom Wine Labels, but only recently did I notice that they are now serving food.

I knew about the personal labels you can get on great wine to use as a special gift, but wasn’t sure exactly what they were serving in the bistro. But since going out to eat is always an adventure, why find out too much beforehand?

My compatriot Russ Salazar met me there last week just before noon and after reading the menu chalkboards and specials out front we decided this had to be our kind of place.

As we walked in (you should see what they have done to the place), we were graciously greeted by the owner, Paula Gendron, who invited us to find a table, inside or outside, and make ourselves comfortable, while handing us a couple of menus.

Paula has been in he food and wine business most of her life and when they moved It’s Personal from its original location nearer Sacramento Street, they built a kitchen and started serving food. Russ and I are both glad they did.

We found a special table inside in the front window and sat down in the comfortable, overstuffed chairs to look over the menu while admiring what they had done to the place.

Well, since neither of us had tried a real Cubano and I had never tasted a Muffelata we ordered those two and asked for them to be split.
The Cubano – which is becoming a very popular sandwich on the east coast – is made by them on a French roll with sliced ham, roast pork, Swiss cheese, mustard and mayo, then grilled with butter and topped with dill pickles. The Muffelata – which some claim is the best sandwich in the world – they make on sliced Italian loaf with home made muffelata mix, minced garlic, salami, pepperoni, mortadella, mozzarella roasted red peppers, and an olive oil drizzle. Both sandwiches were served with a nice side salad of romaine, egg and tomato.

Russ had eaten a muffaleta at the (purported) place where it was invented, Central Grocery in New Orleans and from my research this sandwich appeared to be very close to the original recipe. More about that later.

When our sandwiches arrived they were quite large. Each half of the sandwich was enough for a normal person, but neither of us are normal people, we are so often told.

When Russ, who was toying with his salad, got around to trying the Muffaleta, he took one bite, looked at me and said, “I remember very well the place in New Orleans where I ate the original, but I don’t remember the sandwich. This sandwich I will remember for a long time.”

Well, that’s about as good a complement you can give food. In fact, when the cook came out to talk with us, we passed that on to him. By the way, the cook is Geraldo Rodriguez who remembered us from Los Pinos where he made a special, and very delicious, sauce for the Salmon dish he served me. We obviously remembered him for his outstanding sauces.

The menu also has a large list of interesting and unique tapas, or small bites. Usually they are eaten along with a glass of wine as a prelude to a meal or a whole meal. Paula told us, “They are for people who are not ready for dinner, but want something.” I can see that.

The menu ends with a number of salads, including an interesting Bhel Salad, one of the most popular street foods in India. It is made of chopped cucumber, tomato, onion and cilantro, tamarindo, date chutney and crunchy chickpea and puffed rice bits. Spicy with medium heat, it says. My kind of food.

And, if you don’t think that is enough, there are specials every day. That day they had several, including Pasta Alfredo and a Rhode Island style hot dog.

They serve 12 beers on tap, along with sangria and hard cider, 54 beers in the bottle and also have a great selection of wine, old fashioned sodas, iced tea, lemonade and more.

Live entertainment on Friday and Saturday nights, celebrity bartender on Wednesday evenings, guest winemaker on Thursdays and more.
The are open from 11 a.m. until closing. The kitchen usually closes about 7 or 8 on weekdays and 9 or 9:30 on weekends.

For more information give them a call at (530) 303-3792. You can also follow them on Facebook or their webpage at www.itspersonalwine.com.

← The Discovery of Gold, by John Sutter, Part III
Steppin’ Out – Jimboy’s Tacos →