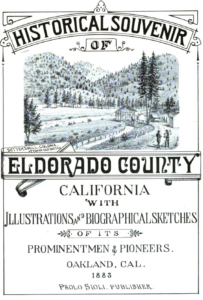 Paolo Sioli’s 1883 “Historical Souvenir of El Dorado County, California with Illustrations and Biographical Sketches of its Prominent Men & Pioneers,” follows “Criminal Annals,” with another similar chapter regarding “Indian Troubles,” which to the early settlers was a significant problem. We often read about isolated incidents between the settlers and the Indians, but few realize that there was an event, events or maybe even lack of events, called the “El Dorado Indian War of 1850-1851.”

“About the middle of summer, 1850, some Indians had been killed in the neighborhood of Johnson’s ranch, situated about six miles above Placerville on the emigrant road. It was rumored at that time, that no provocation on the side of the Indians had given cause to such occurrence, but that it had been done with a view to stir up the Indians to commit some outrage or depredation in retaliation, and then have the strongest measures taken against them; a permanent military post to keep them under control was probably the least what those parties did expect. If so, the scheme worked well enough, the Indians revenging themselves, killed several miners, whereupon the settlers and miners complained in a petition to the county and State, asking for relief from the ravages of the Indians. Three companies of militia were consequently mustered out, one from Mud Springs [the town of El Dorado], and two from Placerville, the whole army was placed in command of Sheriff William Rogers, as Paymaster, B. F. Ankenny being Quartermaster of the expedition, and as soon as the companies were organized they marched up towards Johnson’s ranch there to go in camp, awaiting the appearance of the enemy. In the meantime, for several weeks, J. C. [John Calhoun] Johnson, (by contemporaries called ‘Jack,’ or ‘cock eyed Johnson,’) who kept a store and trading post on his ranch, had the undisputed revenue from the whole camp, but no Indians turned up. The ardor of those Indian fighters being not yet abated, after about four weeks of easy camping life, the officers in charge of the expedition came to the understanding that they had to do something, and it was decided to go in pursuit of the savages, hunting them up in their own hiding places. Order was given to break camp, and soon after the whole army was on the march scouring the country in the direction of Fiddletown [part of El Dorado County until 1854], but as far as to the county line no Indians came in sight, and finally giving up the pursuit removed back to Mud Springs, where the army was disbanded. Thus ended the first Indian war expedition of El Dorado county, with considerably different result from the intention under which it was commenced – to punish the outbreak of the Indians. The official report gave one Indian killed. Dr. Miller, of Placerville, accompanied the expedition as an army surgeon, but his services were not often required for, at least not in the direction where he was employed for.

“The Indians, however, had not given up hostility, they only had waited their time, undisturbed higher up in the mountains, while they would not dare to operate aggressively the few against a couple hundred well armed. But so soon as the army was disbanded they left their hiding places and came down on a raid through Diamond Springs township; they shot at a miner in his cabin which stood on a gulch near Martinez creek and committed lots of other outrages, always avoiding the populated villages or clusters of houses, but annoying the lonesome miners’ cabins. This raid was extended as far down as Mud Springs, and returning they drove all the stock what they could get hold of, from there up on Weber creek toward the mountains, crossed the American river near Brockless’ bridge, and brought their booty in safety; one or two more miners were killed on this retreat.

“Renewed lamentations and complaints were made, followed by a flood of urgent petitions for protection, and the consequence was the organization of another army to fight and punish the incorrigible Indians. Sheriff William Rogers was again appointed commander-in-chief and Major A. [Albert] W. Bee, Quartermaster of the expedition, which was accompanied by Chas. Leake. It caused no difficulty to fill the ranks of the companies, as many young men looked at this campaign as a change from the monotonous work in the diggings, and the grand time which the camping life of the first expedition had occasioned, enticed them to enlist. This done they were sent out in pursuit of the Indians, and to secure a better result than the first campaign had, Bob Carson [listed elsewhere in the book as Kit Carson’s brother] was accompanying the militia in the capacity of an Indian scout. The whole of this army went into camp again at Johnson’s ranch, giving Johnson the benefit of their stay, and smaller bodies were sent out reconnoitering and hunting after the aborigines. After one of these reconnoitering trips the report was sent down to Placerville that the militia had met the enemy and had made an attack with the result of a good many killed on the side of the Indians; the report did not mention if there was any loss on the other side. This report, however, it seems, was only manufactured to stimulate the town-people; by making researches for the battle field no such thing could be detected, and some time after Carson, the scout, declared it as nothing better than a hoax.

“After all, this campaign was on the best way to end just as fruitless as the first one, and to avoid this result the commander and staff decided to try to compromise with the Indians. The services of Smith, [for distinguishing this man Smith from others of the large family of the Smiths, the early day’s miners called him ‘Peglegged’ Smith, from the wooden leg he wore] an old trapper and Indian scout, who was very familiar with Indian habits and languages, were asked for, and he ratified the negotiations for peace with the enemy. Thus ended the second and last bloodless Indian war in El Dorado.

“The Indian war matter came up in the State Legislature, in session in 1855, to settle the outstanding war claims and to look after the accounts of the officers of both expeditions. The voluminous report gives the following figures for the expenses of the war : The first El Dorado expedition, William Rogers, Paymaster, paid out, $23,171.83; The Board of Examiners of military war claims, $1,495.50; Quartermaster Ankenny failed to make returns of public property: $1,185.00; Total $25,852.33.